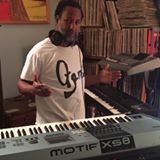 Ron Flowers, known as Fro Organix is from Richmond Virginia. Starting out as a DJ in 1984, a talent passed down from his father Organix later graduated to music production. Within a few years Organix started a group with one of his close friends They had many names and in the end had the name I.D.U. Productions. Between 1988 – 1993 I.D.U. with members B Trent (Via), M. Archer (D’angelo), Tony Walker (Mega Roka) R. Johnson, (DJ Velocity) created many original pieces.

The goal is to let the world hear and see his thoughts, visions and to make a difference to the hearts and soul of the listener and looker. Thank you for your time and interest.